The Annual General Meeting 2012 was hold Thursday 3 May 2012 at 3 p.m. at Elanders’ headquarters at Designvägen 2, Mölnlycke, Sweden. 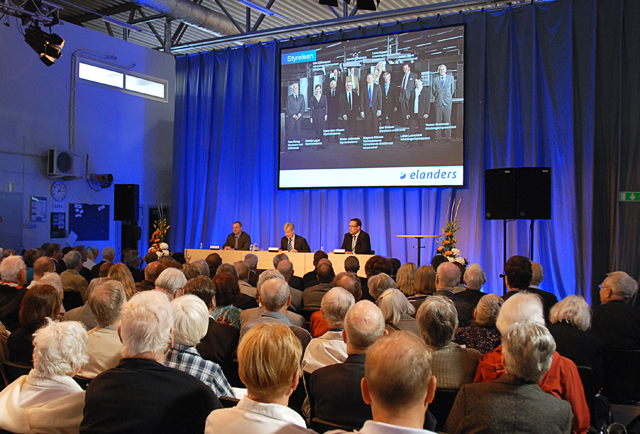 In his speech the CEO Magnus Nilsson reported on the market trends for the products that Elanders has traditionally offered to its customers and how some printed media is facing tough competition from digital media. As a result Elanders is changing its product offer to existing and new customers along with broadening its customer base. The acquisition of the German companies fotokasten GmbH and d|o|m Deutsche Online Medien GmbH are examples of this strategy since they open the door to the consumer market where fotokasten with its hundreds of thousands of customers uses d|o|m’s technical solutions. Another trend is increasingly centralized purchasing of printed matter in major international groups, which is reflected in the fact that Elanders’ global business has increased from 7 to 28 percent of Group net sales between 2007 and 2011.

Magnus Nilsson also presented parts of Elanders’ future vision for the division of net sales in the three product areas Commercial Print, Packaging and Web2Business that in 2011 was 80, 10 and 10 percent respectively of Elanders’ total sales. Elanders’ vision for 2016 is to change the relationship between these numbers to 40, 30 and 30 percent. This could improve margins and reduce business cycle effects.